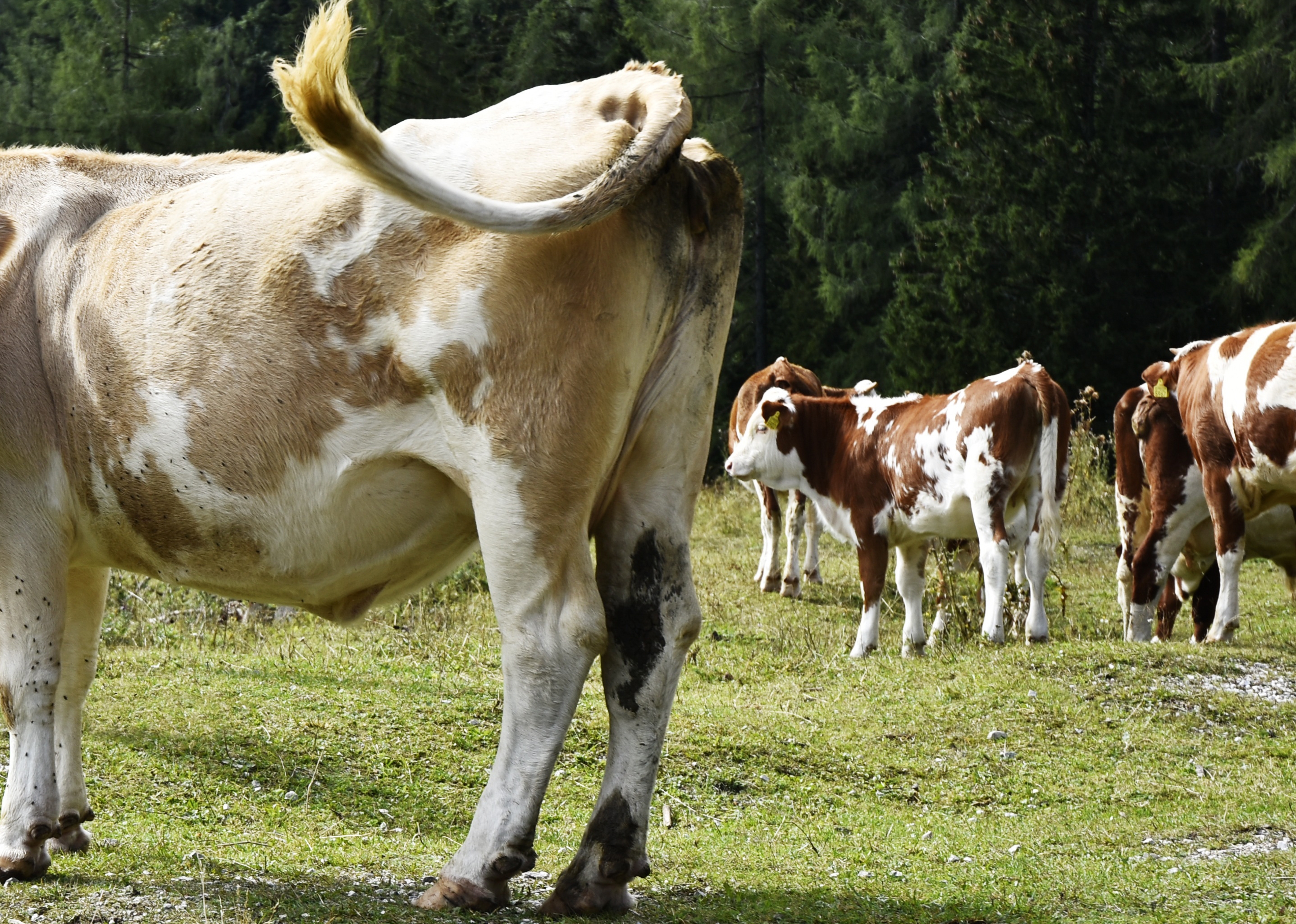 Who Gives a Crap about Grass-Fed Beef? ... Chickens, apparently.

For many of us the image, and maybe the only image, we have of a farm is the idyllic "story book" farm.

A sweet farm complete with a classic red barn and a garden. Chickens in a coop, pigs in a pen and cows grazing on rolling, green hills with plenty of room to roam.

Thanks to every new Netflix documentary and more news outlets criticizing industrial farming, we long for that farm. We see the simplicity and the happy animals. We feel a nostalgia for a time when climate change wasn't a topic of conversation. And, surely, that farm wasn't at fault in climate change. That's how it was and how it should be.

But nostalgia can't be our only reaction to the environmental threats that we see today. We need to study nature itself, and how farming fits into it. To do that, we need to look much further back than that turn-of-the-century farm icon of Americana.

Some of today's most innovative farmers are looking as far back as hundreds of years ago when bison roamed on the prairie of middle America. These large herbivores would naturally eat a diet composed 100% of grass and clover—the forage of the prairie. They would graze close together, chomping down every blade to the ground, and when it was all gone, they'd move on to a new area.

It could be weeks or months before they would return to that same prairie. In the mean time, native poultry—pheasant, quail, and turkey—would scratch through what they left behind in search of insect larvae to eat. They spread the manure, allowing the grasses below to regrow and the cycle to start again.

Farmers today are learning from this natural process in a management practice called "rotational grazing." To replicate it, farmers raise beef together with pastured chickens as they mimic the birds that would naturally follow the herbivores on the prairie.

With rotational grazing, cows are on a smaller piece of land, closer together, and moved, sometimes daily, to a new piece of pasture. Chickens follow the cows, actively seeking out the new bugs and larvae in the cow's crap, spreading them and their own droppings in the stomped on, chewed up, yet active grasses.

As it turns out, managing pastures in this intensive method is not just a nod to history, but also sustainable and far more climate and environmentally friendly than current industrial practices. Even more so than that storybook farm.

Replicating this natural system, it turns out, is a highly effective method of carbon sequestering that nets carbon sink, pulling the greenhouse gas out the atmosphere, and bonding it in the form of grass and, yes, crap.

Here is how it works:

When a cow eats a blade of grass, the plant is forced to regrow. As it does, it draws more carbon from the air to form the carbon compounds like cellulose and glucose that are used for regrowth. This is fundamental photosynthesis (See, sixth grade science was important after all). And because grass is there, growing and regrowing, all year-round, grass will sequester significantly more carbon than an acre of, say, corn that's grown and harvested once a year for industrial farming. Corn is roughly an 80-day crop, which means that soil is barren, sequestering zero carbon, for 280 days a year.

Even more interesting is that an acre of prairie grass, constantly grazed and regrowing, will sequester even more carbon than an acre of forest. How can that be? The trees tower into the air. Surely there's more carbon there than in grass. Statically, yes. But much of a forest's carbon has been there for decades. Each year, the amount of new carbon it sequesters is minimal. Grass, on the other hand, constantly chomped down by a large herbivore in an intense rotational manner, could regrow all of it's biomass many times over in a single year. The cumulative effect is a significant carbon sequestration that plays a vital role in today's environment.

This symbiotic relationship between herbivores, grass and birds is how the top soils of the world were built. The crap—both cow and chicken—allow for an active ecosystem of bacteria, microbes, and fungi in the soil as well. This enables the land to act like a sponge, capturing water, reducing runoff, and providing a buffer in times of both rain and drought.

Lastly, of course, the other great benefit of rotational grazing: A tasty food product thanks to varied nutrition from a variety of grasses for the animal.

But, unfortunately we can't fall into the trap of believing that any package of meat at the store labeled "grass-fed" is saving the environment.

Many of the 100% grass-fed beef products in stores today are from farms that have never seen a chicken. They aren't actively sequestering carbon from a rotational grazing practice, and their harvest of grasses will prove unsustainable in the future even as they can label their product "grass-fed" in order to give you, the consumer, a product that you think you want.

So, how do you do it right? How do you make a choice that is healthy for your family and the planet?

It can be a bit more work, but Nick Carter advocates in his book, "More Than a Mile" that "As consumers, we must learn to scrutinize food through the lens of relationship, not rhetoric."

Get to know your local farmer and local food system. We live in a day when social media makes it easy to connect and it's a great place to start. And platforms like Market Wagon enable you to connect directly with the farmers, learning about the exact farm where the food was raised, and even directly communicating with the farmer who raised it. Farmers can be busy, but if they are doing great, innovative and beneficial things they will be proud to share and help answer questions.

As you shop on Market Wagon, you aren't just shopping local, you're shopping relationally. Know your farmer, and see that the farmer knows their crap.

Let's Find the Food that's Local to You

Let us know your Zip Code so we can show you the local farms, artisans, and delivery options in your area.

Just a moment... We are determining your location so that we can show you the local farms, artisans, and delivery options in your area.

If you prefer to search by your zip code, click here.

Market Wagon's mission is to enable food producers to thrive in their local and regional markets. We serve local farms and artisans with online shopping and delivery fulfillment services. We operate delivery networks and fulfillment hubs all over the U.S.

We'll Match your First $20 in Support of Local Food.

Our mission is to enable local food producers to thrive, so we want to make it as easy as possible for you to support your local farmers.  One way we do that is by matching your first $20 that you spend in support of local farms and artisans.  That means you get HALF-OFF* your first order up to $40. Register here to claim the discount code.

Get Coupon Code Now No Thanks.
*Offer is valid for first-time customers only. Limit 1 per household. Half-off discount valid on the first $40 of merchandise, a maximum discount of $20.

We'll Match your First $20 in Support of Local Food.

Enter this code at checkout to claim your discount for half-off* your first order up to $40.

Discount Code:
Continue Shopping
*Offer is valid for first-time customers only. Limit 1 per household. Half-off discount valid on the first $40 of merchandise, a maximum discount of $20.